Welcome to the official web site for the 10th International Temperate Reefs Symposium (ITRS), which will take place in Perth, Western Australia, from 12 to 17 January 2014 [first circular].

The ITRS is the premier conference for marine scientists with a focus on temperate hard-bottom habitats. The scope is broad and captures natural rocky reefs, man-made structures, and biogenic surfaces. Ecology is a key focus, but the meeting also caters for other scientific disciplines of relevance to temperate reef biology from biogeochemistry, genetics, oceanography and remote sensing to biogeography and management, not to mention all their interdisciplinary links!

The 10th ITRS is a milestone in temperate reef science. Unlike the premier meetings of many other disciplines, the ITRS is not ruled by the rigid structures of a formal society. Instead, the ITRS has always been driven by the passion and enthusiasm of active temperate reef researchers. We hope you will join us for this celebration of scientific achievement in temperate reef science. In line with what we believe is the ‘temperate reef spirit’, we are planning an unpretentious event where scientific communication is the focus, where networking and professional friendships are facilitated and with opportunities to reflect on the past as well as speculate about the future.

Perth has all it takes to be an extraordinary venue for the meeting. It is one of the most remote and isolated cities in the world, and while Perth is one of the fastest growing cities in the western world, Western Australia is one of the most sparsely populated and least explored areas on the planet. This is a particularly exciting place to be working in marine science; few places in the world have such natural biodiversity, resources and activities juxtaposed in such a rapidly growing intellectual and economic environment, and science is at the core of navigating these diverse interests. With its long aboriginal history, recent European settlement and strong contemporary Asian influence, Western Australia is a multicultural melting pot. In addition to its ethnic diversity and globally unique marine biodiversity – recognised in the two World Heritage listed ecosystems of Shark Bay and Ningaloo Reef – the region is also known for its exquisite beer and wine, from breweries such as Matilda Bay and Little Creatures, and the vineyards in the Swan Valley and Margret River. Western Australia has a lot to offer delegates that take the opportunity to explore the vast ‘wild west’!

The 10th ITRS will be hosted by the University of Western Australia (UWA), and take place within the unique, heritage listed surrounds of Western Australia’s oldest university campus, just eight minutes drive from the Perth CBD, a short walk from the bushlands of Kings Park and on the banks of the Swan River with breathtaking views of Matilda Bay and the Perth city skyline.

The organising committee for the 10th International Temperate Reefs Symposium would like to acknowledge the Traditional Owners of the land hosting our conference, the Nyoongar People. We would like to pay respect to their Elders both past and present and extend that respect to other Indigenous Australians. 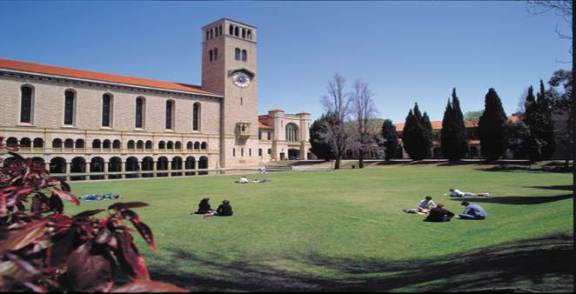 Established in 1911, UWA is Western Australia’s premier university. It is a research-intensive university, recognised nationally and internationally for its outstanding performance in many areas relevant to temperate reefs (read more about UWA’s excellence in research and teaching here). Marine science is a core area of strategic importance and research strength at UWA. Here, the UWA Oceans Institute integrates marine activities across campus, and several other organisations, into a multi-disciplinary research cooperative of local, national and international significance.